Jon Brookes, the drummer from British indie rock band The Charatans has died.

I was surprised to receive messages thinking people thought I had died today.  However, it is a different Jon Brookes.  My thoughts and love go out to his friends and family at this difficult time.  RIP Jon. 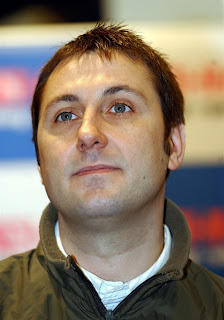 LONDON – Jon Brookes, drummer with British indie rock band The Charlatans, has died. He was 44 and had been treated for brain cancer.  The band said on its website that Brooks died in a hospital Tuesday.

Lead singer Tim Burgess tweeted that the band was “torn apart” by Brookes’ death.
Brookes was a founding member of the band, which drew on funk, rock and psychedelia and came to be associated with the early 1990s “Madchester” scene. The Charlatans’ multiple British hits include “The Only One I Know” and “Can’t Get Out of Bed.”

Brookes was diagnosed with a brain tumour in 2010 after collapsing onstage during a concert in Philadelphia. He had been working on new material with The Charlatans this summer.

He is survived by his wife and three daughters.
Posted by Jon Brooks at 20:02