Plane hijackers flew aircrafts into the Twin Towers in New York. However, there were reports of explosives being strategically placed within the towers to bring them down.

With love and respect to those lost during this devastating time.

Composer/Artist
Jon Brooks
Posted by Jon Brooks at 02:05 No comments:

I've just purchased a Star license with the intention of creating end screens in bulk. However, a lot of the videos have errors relating to 'video resolution mismatch'. I'm a bit disappointed as this was supposed to save me time rather than doing each video manually. 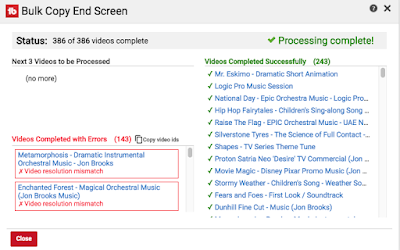 Please see the screenshot, thanks.Does anyone have a solution for this?

Best wishes,
Jon
Posted by Jon Brooks at 03:35 No comments:

DENZEL WASHINGTON. INSPIRE TO MAKE A DIFFERENCE
Featuring the music track 'Seventh Heaven' by Jon Brooks
Posted by Jon Brooks at 03:01 No comments: 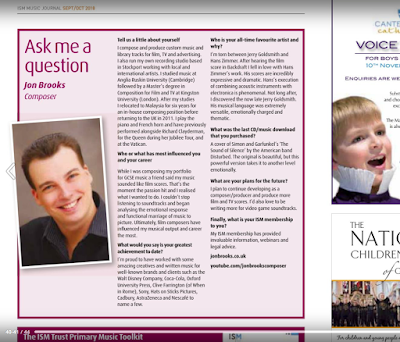 Thank you to The Incorporated Society of Musicians (ISM) for featuring me in their music journal.
(September/October 2018)

QUESTIONS
Tell us a little about yourself
I compose and produce custom music and library tracks for film, TV and advertising. I also run my own recording studio based in Stockport working with local and international artists. I studied music at Anglia Ruskin University (Cambridge) followed by a Masters degree in Composition for Film and TV at Kingston University (London). After my studies I relocated to Malaysia for six years for an in-house composing position before returning to the UK in 2011. I play the piano and french horn and have previously performed alongside Richard Clayderman, for the Queen during her Jubilee Tour and at the Vatican, Rome.
Who (or what has most influenced you and your career)
Whilst composing my portfolio for GCSE music a friend said my music sounded like film scores. That’s the moment the passion hit and i realised what i wanted to do. I couldn’t stop listening to soundtracks and began analysing the emotional response and functional marriage of music to picture. Ultimately, film composers have influenced my musical output and career the most.
What would you say is your greatest achievement to date?
I’m proud to have worked with some amazing creatives and written music for well known brands and clients such as Walt Disney, Coca Cola, Oxford University Press, Clive Farrington (of When In Rome), Sony, Hats on Sticks Pictures, Cadburys, AstraZeneca and Nescafé to name a few.
Who is your all-time favourite artist and why?
I’m torn between Jerry Goldsmith and Hans Zimmer and felt I couldn’t answer without mentioning them both. After hearing the film score in ‘Backdraft’ I fell in love with Hans Zimmer’s work. His scores are incredibly expressive and dramatic. Hans’ execution of combining acoustic instruments with electronica is phenomenal. Not long after, I discovered (the now late) Jerry Goldsmith. Goldsmith’s musical language was extremely versatile, emotionally charged and thematic.
What was the last CD/music download that you purchased?
A cover of Simon and Garfunkel’s ‘The Sound of Silence’ by the American band Disturbed. The original is beautiful, but this powerful version takes it to another level emotionally.
What are your plans for the future?
I plan to continue developing as a composer/producer and produce more film and TV scores. I’d also love to be writing more for video game soundtracks.
Finally, what is your ISM membership to you?
My ISM membership has provided invaluable information, webinars and legal advice.